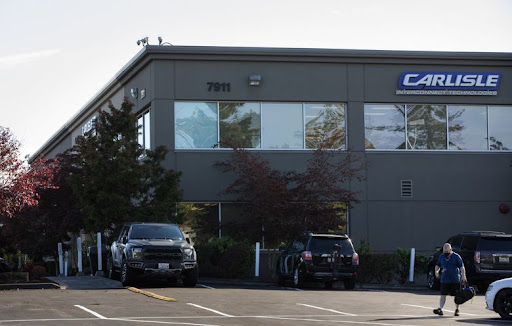 https://www.seattletimes.com/business/boeing-aerospace/profit-not-pandemic-is-driving-closure-of-aerospace-suppliers-575-employee-kent-plant/   Company blames Covid-19. But, Internal company documents reveal a plan — internally code-named Project Cyprus — to move 30% of the annual business previously projected for Kent to China, another 26% to Mexico and most of the rest to other U.S. locations. Michaels said that while transferring manufacturing to Mexico remains standard for U.S. aerospace companies, sending it to China is “against the grain” at this moment of high political tension in U.S.-China relations. The Carlisle Interconnect Technologies manufacturing plant in Kent [closed in August.] (Ellen M. Banner / The Seattle Times) Gender Discrimination Lawsuit filed agaisnt Carlisle Interconnect Technologies in King County Superior Court.  Read the full complaint here:  Carlisle Interconnect Technologies Inc. Lawsuit
Post a Comment
Read more

- March 01, 2021
"[M] illions of Americans continue to find the odds stacked heavily against them in legal proceedings they are forced to navigate alone, confused by the rules and outmatched by state or private adversaries. Too often, it’s a profound injustice. This article relates to criminal defendants, parents in dependency cases, and vulnerable adults in guardianship cases. Read more:  HERE .
Post a Comment
Read more

You have been handed a Severance Agreement - now what?

- January 19, 2021
It's happening all over the place. Your temporary Covid-19 furlough or lay-off has turned into a termination. Your company has handed you a severance letter that includes a lot of language requiring you to do things and refrain from doing things. It may offer a nominal sum of money. Should you sing the severance agreement?  the Equal Employment Opportunity Commission (EEOC) has some advice on the severance agreements. Click Here to review  the full article. Overview:  Make sure that you understand the agreement Check for deadlines and act promptly Consider having an attorney review the severance agreement Make sure you understand what you are giving up in exchange for severance pay or benefits Review the agreement to ensure that it does not ask you to release nonwaivable rights
Post a Comment
Read more

- November 23, 2020
ABA presents: We are the Lucky Ones: Reunification Stories by Former Foster Youth We have collected powerful stories of individuals who entered the child welfare system when they were children and were eventually returned to their parents. Diana  is now a psychology major in college and hopes to help children who are going through the same experiences she once did.  Read Diana's story. Terrell  recounts his feelings of hearing other adults speak badly of his mother, who is now his best friend and inspiration.  Read Terrell's story. Indira and Titus  are siblings who were separated from each other when they were removed from their home. As children, they were powerless to decide what happened to them and felt their voices were not heard. Now as adults, they decided to tell us what they experienced and how they felt, so that all of us can learn from their stories. Read  Indira's  and  Titus's  stories. --Jey Rajaraman, Chief Counsel, and Chiori Kaneko, Staff Attorney, L
Post a Comment
Read more

- November 09, 2020
As we all head back to work, what can you do if your workplace is unsafe? Can unions protect you? How do you protect yourself? Info can be found here: Covid-19 Grievances
1 comment
Read more

Is your ex harassing you? Resources to use to protect yourself from harassment.

- August 26, 2020
Harassment can be serious and dangerous. Take steps to protect yourself. Here are some resources to help. UPCOMING TRAINING TOMORROW AUGUST 27, 2020  Bystander Intervention to Stop Police Sponsored Violence and Anti-Black Racist Harassment training Step by step flow chart to find out if you can apply for a protection order and which one applies to your circumstances:  Go To King County Courts / Protection Order Info. Hollaback.org offers trainings, information and education on stopping all forms of harassment: Go To iHollaback.org   For inspiration while you educate yourself, perhaps some old school Gwen Stefani?: Gwen Stefani Song
Post a Comment
Read more